Bananas in Coconut Milk : In the Thai language, it is known as Kluay Buat Chee. 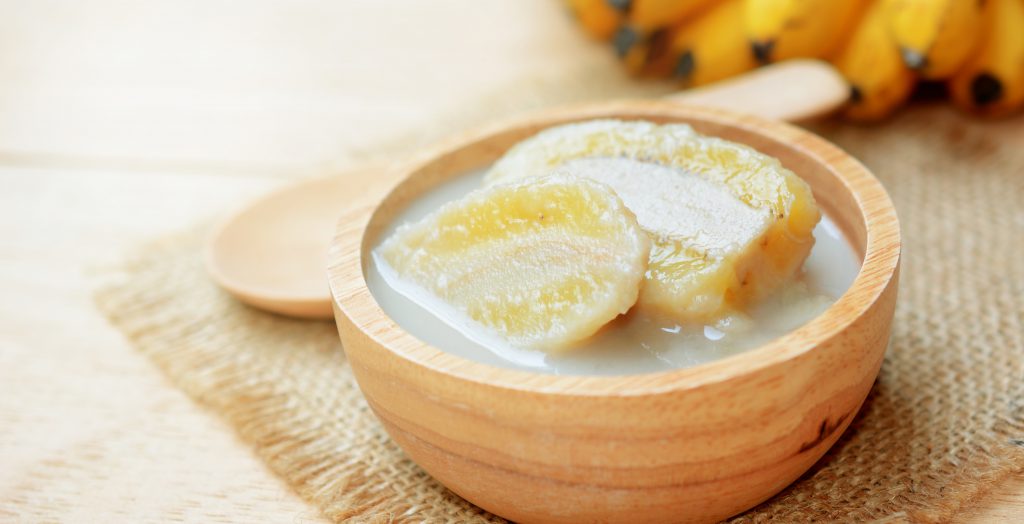 One of the first things you are going to want to do when you arrive to the bustling capital city of Bangkok is to try the street food. Bangkok is known for being a foodie city and no other place has the best street food other than Thailand. Since there are so many variations of different dishes and lots of street vendors, you won’t have a problem with finding the cheapest and most delicious eats!

After a while, you’ll want to expand your palate and try some traditional Thai desserts. One of the best desserts you can get on the side of the street is Bananas in Coconut Milk. In the Thai language, this dish is known as Kluay Buat Chee and it’s a favorite amongst the locals. This dish can be made in a variety of ways but the main ingredients are bananas and sweetened coconut milk from a variety of sugars.

Bananas in Coconut Milk are mainly prepared two different ways. One way is that the bananas are simmered directly in the sweetened coconut milk to create more of a pudding or stew. Another way that is more popular for street food vendors is that they roast the bananas on a small grill, then they press them and serve the steaming hot coconut milk on top. This is an easier way to eat the dessert since you won’t have as much coconut milk acting like a soup.

This dish can also be made with a sugary coconut milk broth from palm sugar and pandan, or it can be made with a saltier broth, making it less sweet. Most street food vendors in Bangkok will serve it with a sweeter broth so your sweet tooth will be rest assured!

If you’re traveling with your family and you are afraid of what your kids should and should not eat, this is a great dessert for them. They will have no problem eating the soft banana once the coconut milk has cooled. Make sure you hold the bowl or plate in case it is still hot from the steaming sweetened milk. The good news is, this dessert if not spicy, like some Thai desserts. They will not only have an easy time eating it, but they will be very satisfied. Don’t be surprised if they ask you for more!

Like most of the street food in Bangkok, bananas in coconut milk is a cheap dish that won’t break your bank. You can easily share it with someone, but sometimes it’s best to treat yourselves to a great dessert. This dessert will cost no more than $2 USD! Most ice cream scoops in the United States cost over $3, and they’re not always made from fresh bananas growing right off a tree. You’ll love tasting the natural sweetness from the Thai banana in the warm coconut milk.

Although this is considered to be a Thai dessert, you can find similar versions all throughout Southeast Asia. If you plan on visiting the nearby countries, keep your eyes peeled for this delicious dessert! Even though it may be made differently, you still can’t be this sweet concoction of bananas and creamy milk from the freshest coconuts. The meaning behind the dessert’s name is quite funny. ‘Kluay’ means banana in Thai, ‘buat’ means to ordain, and ‘chee’ means nun. So the dessert name is basically saying that the banana looks like an ordained nun after it’s dressed with coconut milk. How funny and clever!

The best places to find Kluay Buat Chee in Bangkok is around the popular street food vendors off Sukhumvit. Sukhumvit is one large main road that cuts through central Bangkok. Many fun local districts and street food pods are based along the roadway and it’s a very popular place for tourists to walk around.

If you and your family are looking for a convenient place to stay that’s nearby all the best attractions in Sukhumvit, check out the Centre Point Sukhumvit Hotel location. Centre Point Sukhumvit has the best accommodation at a reasonable price and provides all the best amenities. Our staff will treat you to the best stay in Bangkok at any of our 6 locations. We hope you have a great time visiting the capital city and don’t leave without trying Kluay Buat Chee!